A Growing Controversy: Should We Stop Using Peat?

This year’s World Wetlands Day, celebrated on February 2, highlights the significance of taking action to “ensure the conservation and sustainable use of wetlands for human and the planetary health.” Almost 90% of the world’s wetlands have been damaged over the last 300-plus years, and wetlands are disappearing three times faster than forests.

At first glance, the connection between gardening and the decline of wetlands may not be obvious, but there are some important environmental issues to consider. A lot of peat is used in horticulture — as a soil amendment, in lawn patching, in seed starting, and in container gardening. Just check the bag of potting soil at your house and, sure enough, you’ll most likely find that peat is a primary ingredient. It’s all-natural, naturally organic, and biodegradable. So, what’s the problem? Why is there a growing controversy about peat? It takes a bit of digging (no pun intended) to understand the issue.

What is peat?
Peat is the decomposed remains of moss from bogs, which turns into a type of soil; it’s not the growing moss itself. It is found underneath the growing moss, and that peat layer typically extends several meters deep in the ground. Peat is of ancient provenance, growing slowly and accumulating over centuries. Its use in horticulture began in the 1940s and 50s, and its air- and moisture-holding capacity makes it a highly effective growing medium for commercial producers and a very popular component of potting soil for home gardeners.

Where does peat come from?
Peatlands — a term often applied to peat bogs — are a unique and rare type of wetland, covering very little of the Earth’s surface. Some peatlands are found in Asia and in northern Europe, but in these regions, much of this resource has been degraded due to human activities, including the use of peat for fuel, and more recently, due to wildfires. Most of the remaining unspoiled peatlands are in Africa and Canada.

One fact stands out for American gardeners: virtually all of the peat sold in the United States comes from the vast sphagnum moss bogs of Canada. Peat producers harvest the peat by first draining the bog and then extracting the peat with vacuuming machines. This extraction process is the heart of the problem. Why?  Because peat is very rich in carbon.

Peat and carbon sequestration
There’s something special about the cold, wet, anaerobic (oxygen-restricted) conditions in a peat bog that promotes rapid carbon uptake or fixation by the growing moss, with little being released into the atmosphere as the moss dies and decomposes. Thus, even though peatlands cover only 3% of Earth’s surface, they capture and store 15 to 30% of terrestrial carbon. With our current climate crisis, this carbon sequestration is important to help reduce the emissions that cause global warming. Unfortunately, the extraction of peat for use in horticulture releases carbon. In fact, most disturbances in peat bogs — whether in the form of wildfires, permafrost thaw, or human activities such as drainage and extraction — release carbon back into the atmosphere.

It’s no surprise then that peat bogs have recently garnered much attention from scientists and environmentalists, who are urgently measuring the precise amount of carbon stored in Earth’s peatlands, as well as how much carbon is being emitted when peat is disturbed. The estimated total emissions resulting from peat harvesting for horticulture only contribute a small percentage of the carbon emissions attributed to peat disturbance. The heavy hitters are road and mine construction. It should be noted that most Canadian peat producers revegetate the bogs, and scientists have mostly concluded that these restoration programs are somewhat helpful, though it takes a long time — about 20 years — for the bog to return to normal.

If peat mining is a small percentage of the total emissions, do we really need to worry about using it? Cutting back on the use of peat in horticulture will definitely help preserve the carbon stores in peatlands. Perhaps most important, peat extraction and use for horticulture are simply not sustainable. Peat grows at a very slow rate, only 1/32 of an inch per year. With some of the bogs being as deep as 40 feet, that means we are potting plants and starting seeds in a resource that takes centuries to grow! It is unclear whether restoration efforts ever fully succeed. Why perpetuate a practice that releases carbon and is not sustainable? 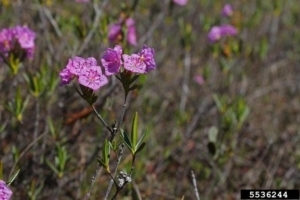 Plus, there is the larger need to protect all kinds of wetlands. As the Environmental Protection Agency reports, besides carbon-storing, wetlands protect and improve water quality, provide fish and wildlife habitats, store floodwaters and maintain surface water flow during dry periods.

What are the alternatives to peat?
Thirty-plus years of research have identified a number of low-cost and sustainable alternatives to peat, ranging from composted bark and livestock manures to brewing waste and sludge from pulp and paper production. For today’s gardeners, some peat alternatives are more accessible than others. For example, coconut coir is increasingly used in gardening products to reduce or eliminate the need for peat. It can be purchased in bales or compressed bricks that expand when moistened. Although coir is an abundant waste material, the need to transport it from Southeast Asia should be factored into its carbon footprint. Pine wood fiber is another accessible non-peat amendment to growing media that has been widely used in Europe for decades.

There are peat-free potting soils on the market now, though they are more expensive. You can make your own, using recipes at No-Peat Potting Soil Options/University of Minnesota Extension.

After learning about the important ecosystem services that peatlands provide, you’ll probably be checking out the label of that next bag of potting soil and considering substitutes for peat pots before purchasing either product. And, perhaps you’ll want to visit a peat bog for yourself some day!