I knew I had hit a home run – landscape wise – when I discovered some visiting friends peering intently at some plantings in the far corner of my ornamental garden.  As I drew near to join in their conversation, I found that their attention had been drawn to a swath of deep purple irises backed by tall, silvery purple alliums.  The golden foliage of nearby shrubs provided a pleasing and harmonious contrast to the composition’s various purple hues.  Although quite lovely in their own right, it was neither the irises nor the shrubs that garnered so many comments from my friends.  It was the alliums that had captured their fancy!

It wasn’t all that long ago that alliums, also known as ornamental onions, were a rarity in the landscape.  However, they’re really catching on with gardeners, who appreciate their beauty and recognize their merits as an architectural contrast to the mounding or spreading forms of other ornamental plants.  It’s exciting to see these charming bulbs appearing in landscapes everywhere.

Ornamental onions belong to a large botanical genus that includes chives, shallots, leeks, onions and garlic.  But, unlike their edible cousins, the ornamental varieties are grown strictly for their showy spherical flower heads.  Ranging from 1 to 10 inches wide, the flower heads are formed from clusters of tiny, star-shaped flowers.   The flower heads on some of the larger varieties may contain 100 or more individual flowers.  Depending on the selection, the flowers range in color from silvery lavender to reddish purple as well as white, yellow and blue.

The flower heads on most ornamental onion varieties rise well above a clump of strap-like leaves.  The foliage of the early bloomers emerges very early in spring and generally dies back just as the plants come into bloom.  Late-blooming alliums maintain their attractive green foliage much longer into the season.  It’s wise to position the early bloomers in the landscape so that surrounding plantings hide the deteriorating leaves.

In addition to providing beauty and architectural interest to the ornamental garden, alliums attract bees and butterflies.   If that’s not a good enough reason to try alliums, here’s more good news.  Deer, rabbits, voles, squirrels, chipmunks and other critters avoid them because of the faint oniony taste of the foliage and bulbs.

A SAMPLING OF ALLIUM SPECIES

The ornamental allium family consists of more than 300 species.  The bulbs vary considerably in size, generally in proportion to the plant’s overall height. Some of the shorter allium selections grow to just 6 inches while some of the taller selections top out at around 4 feet.  Most varieties grow to 18 inches or more in height and are good choices for the middle or back of the border.

A sampling of the more popular allium species and hybrids grown in American gardens include:

USES FOR ALLIUMS IN THE LANDSCAPE

HOW TO GROW ALLIUMS

Ornamental alliums are very easy to grow but they do have some specific requirements.

If they are happy in a sunny, well drained spot, alliums may form colonies or self-seed.  Overcrowding may hinder flower production.   That’s the bad news.  The good news is that you now have the opportunity to grow additional alliums for your garden or to share with friends.  Alliums may be propagated in several ways:

Ornamental onions are normally trouble free, but they are subject to the same pests and diseases as their culinary cousins.  They may suffer from onion white rot, downy mildew, and onion flies.  Pests include slugs, snails and allium leaf miner. 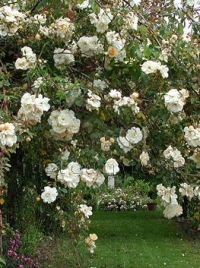 A whimsical accent for the ornamental garden.

Tired of the same old spring flowers? Try this native!

What's all the fuss about?

The Ornamental Garden in April

April is arguably the busiest month for a gardener!

In the Vegetable Garden — April