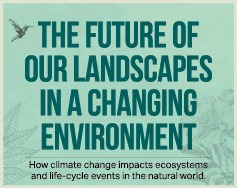 The red stripes tell the story. After explaining the science of global climate change, Jeremy Hoffman brought it home with a boldly colored infographic: a series of vertical bars, ranging from dark blue to deep red, that show departures from average annual temperatures in Charlottesville since 1895. The pileup of red bars to the right in the graph, signifying the last decade or so, confirmed what we’ve all been feeling. It’s getting warm in here.

That was just one of many wakeup calls from the Piedmont Master Gardeners’ 30th anniversary commemoration at the Paramount Theater on September 8. Titled “The Future of Our Landscapes in a Changing Environment,” the program offered insights into what’s happening to the planet, what it means to us and to our community, and what we must do now to stave off harmful impacts in the years ahead.

Hoffman, chief scientist at the Science Museum of Virginia, was part of a roster of distinguished speakers and panelists our program brought to the stage. It also featured Dennis Dimick, whose 35 years at National Geographic included stints as a photography editor and as environment editor. 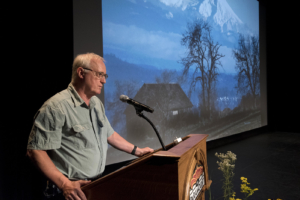 With stunning images from the magazine’s pages, he presented a visual journey through a world that now strains to support more than 7.5 billion people. He framed his narrative with the concept of the Anthropocene, or human age, a proposed geologic epoch defined by our transformation of the planet and the mark it will leave in the geologic record long after we are gone.

The climate disruptions already upon us — extreme temperatures, heavy precipitation events, rising sea levels, coastal flooding, and lengthening growing seasons—are among the effects of this transformation. They are largely a product of our reliance on fossil fuels that have made our way of life possible but now pose threats to its future.

Revving Up the Greenhouse Effect

The second volume of the Fourth National Climate Assessment, published last year, spells out the physics of what’s occurring:

“Gases in the atmosphere prevent some of the heat radiating from Earth’s surface from escaping to space. … This natural greenhouse effect warms the planet’s surface about 60°F above what it would be otherwise, creating a habitat suitable for life. Since the late 19th century, however, humans have released an increasing amount of greenhouse gases into the atmosphere through burning fossil fuels and, to a lesser extent, deforestation and land-use change. As a result, the atmospheric concentration of carbon dioxide, the largest contributor to human-caused warming, has increased by about 40 percent over the industrial era. This change has intensified the natural greenhouse effect, driving an increase in global surface temperatures and other widespread changes in Earth’s climate that are unprecedented in the history of modern civilization.” 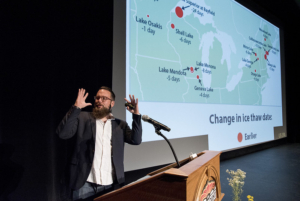 In his presentation at the Paramount, Hoffman noted that French physicist Joseph Fourier recognized the greenhouse effect as early as the 1820s. By the 1890s, as the Industrial Revolution was hitting full stride, scientists were already predicting rises in global temperatures as coal-fired factories pumped more carbon dioxide into the atmosphere. That was only the beginning. Since 1900, concentrations of atmospheric CO2 have jumped from under 300 parts per million to 408 parts per million. And the bulk of that increase has occurred just since 1960.

How Climate Change Affects Our Area

We are now seeing the impacts in our region. For example, hardiness zones are creeping northward. According to a National Oceanic and Atmospheric Administration analysis reported recently by the New York Times, western Virginia will join the Piedmont in Zone 7 by 2040, and Tidewater will move from Zone 7 to  Zone 8. Hoffman referred to a study by Old Dominion University’s Michael J. Allen documenting that spring and summer are starting earlier and autumn and winter are starting later in many urban areas around the country. Some of the most pronounced changes in seasonal start dates are occurring in Richmond. 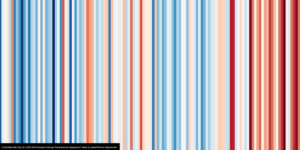 Looking at data from Charlottesville, Hoffman’s colorful visualization made plain that where we live is getting hotter. He also noted that first freeze dates have gotten later since the 1890s, and last freeze dates have moved up about a week, from April 8 to April 1. That sounds like good news for gardeners and growers, but research shows that such changes have made budding plants and early-sprouting crops more vulnerable to late cold snaps. So-called “false springs” can lead to crop failures.

Moreover, Charlottesville now has 20 more annual mosquito days than we did in 1980, and spikes in tree pollen counts are happening earlier in central Virginia, making allergy seasons longer. As for wildlife, Hoffman noted that the National Audubon Society has projected major changes in the geographic ranges of North American birds as the planet warms. For instance, the winter ranges of the common loon and wild turkey will slip out of most of the South by 2080, and the purple finch is expected to all but disappear from our winter feeders in Virginia by that time. Bees are in trouble as well; scientists have found that bumblebees are failing to adjust their range as the climate heats up and could face decline.

What the Future Holds

According to the Fourth National Climate Assessment, more damaging impacts are in the offing for Virginia and other southeastern states:

“Changing winter temperature extremes, wildfire patterns, sea levels, hurricanes, floods, droughts, and warming ocean temperatures are expected to redistribute species and greatly modify ecosystems. As a result, the ecological resources that people depend on for livelihood, protection, and well-being are increasingly at risk, and future generations can expect to experience and interact with natural systems that are much different than those that we see today.” 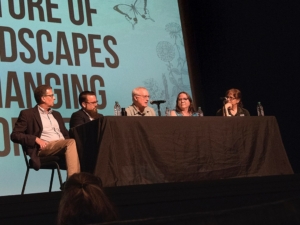 Lawrence Band, the Ernest Ern Professor of Environmental Sciences at the University of Virginia and a panelist for PMG’s event at the Paramount, was a technical contributor to the National Climate Assessment. He sees such changes starting to occur in our area. As an example, he cites greater incidence of heavy rainfall and flooding. These intense rain and flooding events can, in turn, lead to higher levels of nutrient and sediment runoff in our streams and rivers and further harm to downstream waterbodies such as reservoirs and the Chesapeake Bay. The risk of drought is expected to increase as well.

He also points to rising temperatures that can result in a greater number of very hot days, with health consequences for people who work outdoors or who lack access to air conditioning. “The maintenance and growth of green space — urban tree cover, green infrastructure — can be a useful solution to mitigate these impacts, if carefully planned with an involved community,” he said. However, climate change is also imperiling the trees that give us shade. He noted that warmer winters may have hastened the spread of the woolly adelgid, the insect that has wiped out most of the hemlock canopy in the mountains. Likewise, the spread of the emerald ash borer threatens the cover provided by ash trees.

The National Assessment outlines ways our society can fend off the impacts of a changing climate, but we must act quickly to curb greenhouse gas emissions and other contributors to the problem. Dimick sees promise in the work of Project Drawdown, a research organization dedicated to identifying the most viable solutions. It advocates dozens of options, ranging from transitioning to wind and solar power to measures such as refrigerant management as rising temperatures increase global demand for air conditioning and cooling.

Master Gardener and environmental consultant Frank Reilly, who served as master of ceremonies for the Paramount event, urged adoption of climate-conscious horticultural practices, such as planting carbon-absorbing trees and shrubs, scaling back lawns (and all that mowing), and no-till cultivation that keeps carbon in the soil. “Best are practices where we can both reduce our use of fossil fuels to mitigate climate change and do things to help us adapt to climate change,” he said after the program. As an example, he suggested “planting the right plant in the right place while realizing that the right plant might be changing for each of our places.”

Hoffman emphasized the need for better communication and greater public engagement on this issue. He pointed to a climate opinion survey showing that 71 percent of Virginians believe global warming is happening, and 78 percent support regulating CO2 as a pollutant, but only 42 percent believe global warming will harm them personally, and just 21 percent recalled hearing about climate change in the media every week.

For our part, the Piedmont Master Gardeners have a new tool for educating the public about ways to reduce our environmental footprint. Titled “Be a Steward of the Environment,” this guide to sustainable practices and helpful websites was unveiled at the Paramount and will be used in PMG’s outreach in the months ahead. A copy is included — in two formats —  at the end of this article.

As it happens, PMG’s 30th anniversary event came together at a time when the City of Charlottesville, Albemarle County, and the University of Virginia are each making new commitments to climate action and  are developing or updating their plans and goals. These efforts have borne fruit in recent months: City Council and the Board of Supervisors have both adopted a greenhouse gas reduction target of 45% by 2030 and have pledged to reach carbon neutrality by 2050. The University is ahead of schedule in pursuing its goal to reduce greenhouse gas emissions 25% below 2009 levels by 2025.  It is also in the process of setting a new reduction target and developing a new sustainability plan for 2030.

As educators and environmental stewards, Master Gardeners have a role to play in helping our community fulfill these commitments.  Please join us. 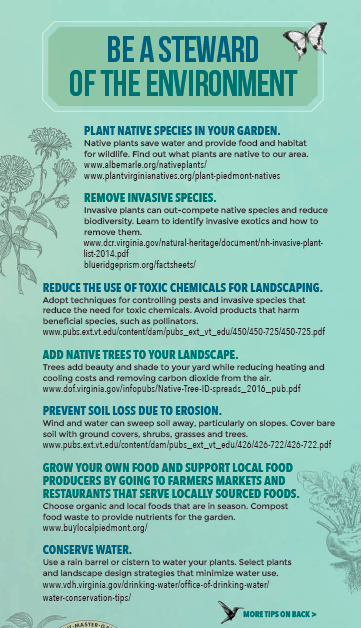 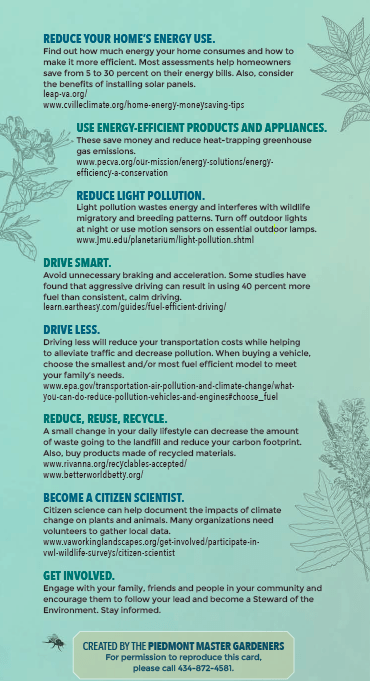 The Guide is reprinted below with easy-access links:

BE A STEWARD of the ENVIRONMENT 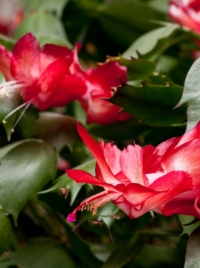 Learn how to make the holidays even brighter with the colorful blooms of Schlumbergera.

December is a transitional month for vegetable gardeners as we transition from last year's closeout to next year's planning. Or, maybe we just take a break...

2019 in Review: Article Highlights from The Garden Shed

2019 articles highlight sustainability; use these summaries to find articles of interest.

Brighten up that gelatinous blob!

Go on a bird walk; become a Master Naturalist; learn about the tiger swallowtail.

But we can help mitigate the impacts