What can be better than an edible plant, native to Piedmont Virginia, that can be grown as a bush or small tree in your yard or home orchard?  The American hazelnut (Corylus americana) grows in most of the eastern half of the United States and is relatively hardy, disease resistant, and adapts to various growing conditions.  You may encounter tasty hazelnuts in grocery stores or as the ingredient in Nutella.  However, commericially available hazelnuts usually come from Oregon or Turkey and would likely be either the European filbert/hazelnut (Corylus avellana) or a hybrid, the most common hybrid in commercial production being C.avellana x maxima.  (Note that the Corylus avellana is referred to as either the European filbert or European hazelnut).  These commercially-grown nuts have been selected for their larger size and better taste.  All hazelnuts can be eaten raw, roasted, or in baked goods and granola, although one North Dakota orchardist describes his “wild hazelnut” as producing a “bitter nut.” 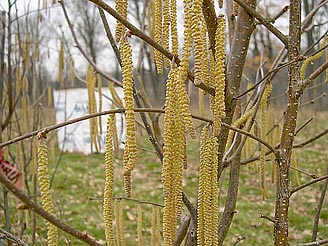 Catkins on a male hazelnut

Our native tree has alternate simple leaves that are 2½ to 5 inches long, with serated edges in an oval shape.  The ½-inch brown nut is enclosed in a husk that starts green, turning to brown as it ripens and opens.  It needs sun or partial shade with moist soil and a moderate Ph.  It often grows in clumps 3-12 feet high.  If a tree is desired, you can cut back the stems that grow from the base of the plant until the tree produces enough shade so it will no longer produce sprouts.  This could require several years’ patience, and it’s not clear to me how readily our native hazelnut can be shaped into a tree.  European filberts and hybrids often are commercially cultivated as trees.  Fall color varies in hazelnuts, including yellows, reds, and orange.

Research revealed that my two shrubs are both males with 1- to 3-inch light brown catkins that appear well before the leaves.  Females have inconspicuous, thin red catkins that look like threads.  Since pollination is by wind and requires both male and female plants, I’ve produced no nuts.

Native shrubs produce nuts for birds, squirrels and other wildlife.  Corylus americana has no significant insect or disease problems although the greenery may attract leafhoppers and others insects as well as deer.

If you want to grow the best nuts for eating, the situation becomes a little more complicated due to the Eastern Filbert Blight (EFB).  Fortunately for our native Corylus americana, the Blight does little or no damage to it, although the native plant does harbor this disease and would threaten its cousins.

You’ve probably heard of a hazelnut relative that is popular with ornamental gardeners.  The distorted stems of Harry Lauder’s Walking Stick (Corylus avellana ‘Contorta’), a sport of the European filbert, make it an interesting wintertime specimen that we can grow here in our area.   Please note, however, that contorted ornamental hazelnuts can be infected with Eastern Filbert Blight.

But back to our blight-resistant American native.  If you’re going to give the American hazelnut a try, I suggest planting both male and female shrubs together, thus creating a love nest producing nuts without taking extra space.  I find close mowing controls the spreading stems.  However, at harvest time you will have to compete with squirrels and their fellow thieves. Be forewarned.

The Edible Garden in June

It's time to get summer vegetables planted and growing.

Echinacea – Americana in the Garden

You can try "new and different" or love her the way she is, but Echinacea is a must-have in the sunny perennial garden.

The world of gardening webinars is now open!

And let them do all the work

Tasks and Tips in the Ornamental Garden

June is a maintenance month: water, weed, and keep your eyes and clippers sharp!