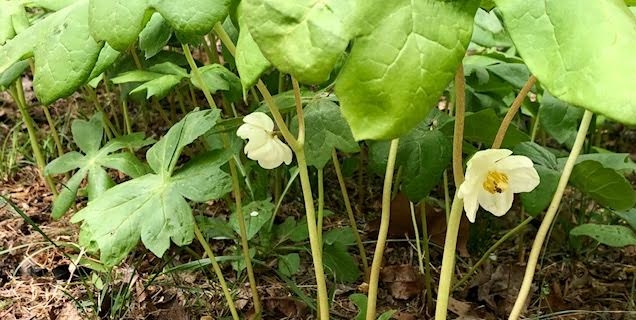 The mayapple (Podophyllum peltatum) is a native perennial found in either moist or dry woods in Virginia and most of eastern North America. Perhaps you’re lucky enough to have them; if not, keep an eye out for them on a forest walk.  It’s an unusual plant with an unusual story.  The leaves — which look like tiny umbrellas — unfold from a single stem and they are either single or a pair of leaves.  Only plants with two leaves will bloom in any given year.  The flowers, which are white in color and quite lovely, are mostly hidden under the leaves, which are fairly large and may reach a foot in diameter.  In the wild, mayapple is usually found under deciduous trees, where it tends to create large colonies via rhizomes.  And in my yard, that is exactly where it is located and how it behaves.

It was many years before I learned that there were Mayapples on my property; they were hiding in an area of mostly invasives, and it was only when we set about clearing those invasives that we discovered the Mayapples.  Actually, the discoverer was the knowledgeable fellow helping us with the clearing; he was familiar with them and we sensed his excitement about this find.  Nowadays I eagerly look forward to the stems as they push up through the earth in early spring.  They’re worthy of daily inspection so you can catch the enchanting sight of unfurling leaves.  But these plants are very toxic, so gardeners with young children may wisely avoid planting them.

Mayapples prefer moist, acidic soil but can withstand drought, dry soil, and black walnut.  They do not like competition from other plants, nor do they like mowing. Mayapple plants are available from online purveyors of native plants as well as from some local retail sources, including Monticello, www.monticelloshop.org/may-apple-podophyllum-peltatum and other native plant nurseries.

Mayapples are quite difficult to propagate from seed, on top of which, they seem to have difficulty producing seed at all, mostly because they attract very few pollinators, and also because the plant is not self-fertile. If a plant does manage to produce seed, it is not likely to germinate — as some scientists discovered to their dismay.  These scientists had a little better luck with seeds sown with fresh mayapple fruit pulp.  Other scientists have reported that seeds that had been ingested by turtles germinated faster and had a higher probability of success.  If you’d like to read more about this research, take a look at “Mayapple: A Review of the Literature from a Horticultural Perspective,” www.researchgate.net/pub,228502025. Despite the pessimistic research results,  my own experience suggests there’s room for optimism on seed germination.  Otherwise, why would a few mayapples suddenly appear in a grassy area fairly far from my colony?  I’m guessing I got a helpful hand from a turtle.

The Mayapple does not make a great border plant because it goes dormant in the summer and because the blossoms are mostly hidden.  But they’re terrific for a wild or woodland garden, and they make a lovely ground cover under deciduous trees, so long as you don’t mind their disappearance as summer progresses.  A gardening friend came up with a brilliant location for her Mayapple — on the edge of a retaining wall that lined a walkway beneath, so the flowers were at eye-level.  From the vantage point of her walkway, you can watch the blossoms turn to the fruits — the “apples” as it were. 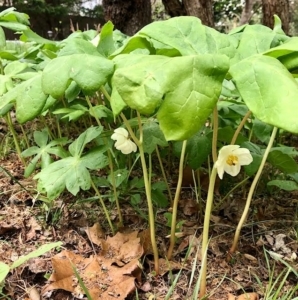 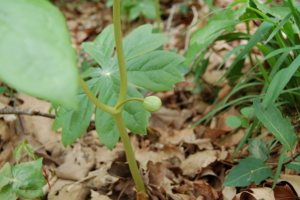 The fruit — the “apple” — of Mayapple is lemon yellow. Photo: Albert Herring of Va. State Parks.

Since Mayapples are very effective colonizers via underground rhizomes, a gardener need not worry about propagating using seeds.  Once you’ve got a colony going, you’ll be able to transplant a few to a new location.  I’ve tried this myself, and can confirm the recommendation that success depends upon taking more than one underground node.

Since deer and rodents do not bother Mayapples, I should have guessed this:  All parts of the Mayapple are POISONOUS –– though the fruits are supposedly not toxic when they are fully ripe.  A leading horticulturist, A.S. Weakley, says: “The ripe fruits are edible; the rest of the plant contains a variety of alkaloids, and is poisonous-medicinal. Compounds from Podophyllum are used in wart removal, and show anti-viral and anti-cancer promise.” (Weakley 2015).  But please DO NOT eat those apples!  Scientists may be able to determine when a Mayapple fruit is fully ripe — and thus not poisonous — but don’t try this yourself.

That term “poisonous-medicinal” is kind of a head-scratcher, but the more I learn about plants, the more there is to learn.  What makes Mayapple unappealing to garden munchers can also be used to kill cancer cells; that’s an over-simplification, but a decent summary.   It’s really no surprise that about half the new drugs on the market come from plants.  In the case of Mayapple, a Himalayan variety (Podophyllum hexandrum) was the original source of podophyllotoxin, a cytotoxic compound that’s the starting point for an anticancer drug called Etoposide. The drug has been used since 1983 to treat dozens of different cancers, from lymphoma to lung cancer. Today, the Himalayan relative is endangered, and drug manufacturers turned to the American Mayapple, but the supply of podophyllotoxin remained low.   Scientists recently developed a bio-engineered source for podophyllotoxin, and I will not attempt to explain that here, though if you’re curious, you can read about it in the journal Science, cited below.

For a native perennial that will colonize nicely as a ground cover under trees and will not be munched by deer, the Mayapple can’t be beat.

Growing Raspberries in the Home Garden

Growing raspberries in the home garden is easy and rewarding to do.

An easy and delicious dessert for your fresh raspberries

In the Ornamental Garden — Tasks & Tips for May

By Pat Chadwick and Cathy Caldwell

Edible Gardening in May