This time of year they are SO tempting! Seeing the eruption of white blossoms along a city boulevard or a suburban driveway, it’s easy to be lured into adding a Bradford Pear to your yard. But DO NOT give in.

The Bradford Pear is a widely planted cultivar of Pyrus calleryana, or Callery Pear, a highly invasive species that takes hold in vacant lots, abandoned pastures and fallow fields. Bradford Pears can still be purchased at nurseries and garden centers, even though they have been banned in some communities. South Carolina even offered a “bounty” for trees that were removed and replaced with non-invasive alternatives.

In a recent alert, our friends at Blue Ridge PRISM (Partnership for Regional Invasive Species Management) warned that non-native Callery Pears overtake natural areas and out-compete desirable native trees. Moreover, they threaten farmland because grazing livestock do not eat them, allowing the trees to spread aggressively.

An Ornamental Tree That Ran Wild.
Planting the Bradford Pear became all the rage among landscapers back in the 1960s. With its early spring flowers, neat oval form and brilliant fall display, it seemed the ideal ornamental tree. Plus, it can take a lot of abuse—drought, heat, and poor soil. But in time, problems become apparent. Most notably, the Bradford Pear has a weak structure. When trees planted in the 1960s reached maturity in the 1980s, they grew to be a hazard as large limbs began to fall in wind and ice storms, or for no apparent reason. And the blossoms that are so charming and abundant in early spring become putrid as they fade. 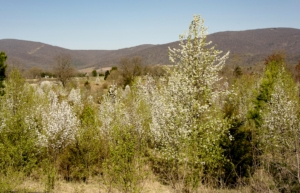 The biggest problem has been its invasion into the wild. The Bradford Pear was bred to be sterile; it cannot pollinate another Bradford Pear and produce viable fruit. But, as it turns out, this tree can cross-pollinate with other Callery Pears and different varieties of its cultivars. As other cultivars became popular, and wild Callery Pears spread across the countryside, they began to produce an abundance of fruit with viable seeds that are readily spread by birds.

As with many other invasive trees and shrubs, the Callery Pear cannot simply be cut down and achieve eradication. This will cause it to send up new shoots and spread more rapidly. Blue Ridge PRISM offers a factsheet with multiple techniques for getting this invader under control.

Go Native With Alternatives.
The best way you can help stop the spread of the Callery Pear is not to plant any more of them. When you feel the tug of those white blooms in the spring, consider native alternatives, such as the Downy Serviceberry (Amelanchier arborea). According to the Piedmont Native Plants guide, this small, early-flowering tree attracts 40 species of songbirds and is host to 119 species of native caterpillars, including those of such butterflies as the Red-Spotted Purple, the Coral Hairstreak and the Striped Hairstreak. Adding it to your landscape will help support the web of wildlife that is essential to a healthy environment.

For more information, check out these resources: 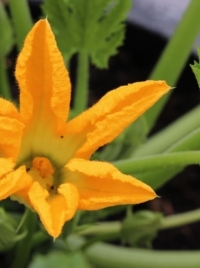